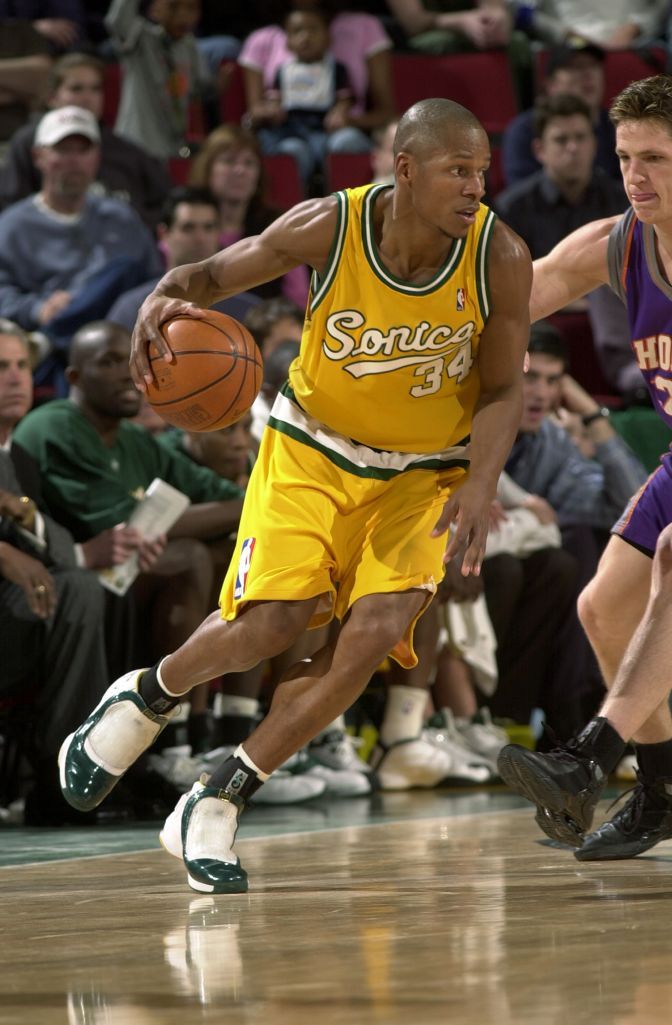 Arguably the greatest 3-point shooter of all time (Steph Curry aside), Ray Allen spent much of his peak playing for the Sonics. Acquired from Milwaukee in the 2003 Gary Payton trade, Allen quickly embraced his role as the new face of the franchise. During his four-and-a-half years in Seattle, he averaged 25 points and keyed a sharpshooting offense that, in each of his full seasons, ranked in the top three for both 3-point shots made and attempted. The proliferation of the 3-point shot was still 8-10 years down the road, and Allen’s Sonics provided early evidence that such a strategy could win. His 54 points against Utah in January 2007 are the second-most ever scored by a Sonic in a single game.

Though slowed by injuries in 2003-04 and 2006-07, Allen’s 2004-05 playoff run was one of the more memorable in Sonics history. After dispatching Sacramento in 5 games, the Seattle put up a valiant effort against San Antonio, one of the NBA’s greatest dynasties at their absolute apex. Allen and the Sonics pushed the heavily-favored Spurs to 6 games, barely losing Game 6 in the final seconds. During the playoffs, Allen carried the load with 26.5 points per game.

After his trade to Boston in 2008, Allen went on to win titles with the Celtics and Heat, including hitting one of the biggest shots in NBA history against San Antonio in Game 6 of the 2013 Finals. He’ll always be remembered fondly by Seattle and remains the last great Sonics superstar (for now).