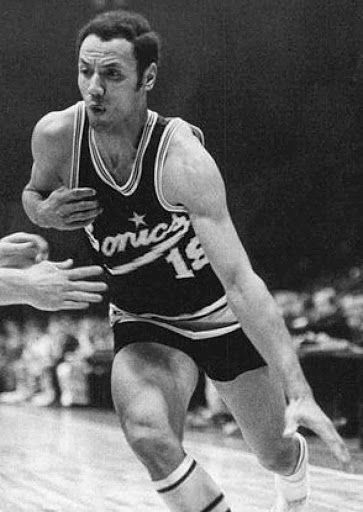 A two-time All-American out of Providence college by way of Brooklyn, Lenny Wilkens rose to superstardom during his stint with the St Louis (now Atlanta) Hawks, including making an NBA finals appearance in 1960. Upon being traded to the Sonics in 1968, Wilkens had already made 4 All-Star games and placed 2nd to Wilt Chamberlin in the 1967-1968 MVP race.

A talented point guard with a knack for getting to the hoop, Wilkens made an immediate impact in Seattle. During his 4 years with the Sonics, Wilkens averaged 20 points and 9 assists per game while making 3 more All-Star games. In 1971, Wilkens outplayed teammates Jerry West, Oscar Robertson, Wilt Chamberlin, and Kareem Abdul-Jabbar to became the first Sonic to win the All-Star game MVP, dropping 21 points in 20 minutes on 73% shooting. Perhaps most impressive of all is that Wilkens took the reigns as the Sonics head coach (while still playing) in 1969, improving the team’s record each year and leading Seattle to a then franchise-record 47 wins during his final year as a player/coach (1972).

After his playing career, Wilkens rejoined the Sonics as head coach in 1977, leading the Sonics all the way to the 1978 NBA Finals. Despite losing to the Washington Bullets in 7 games, Wilkens rallied the Sonics the following year, leading the team to 52 wins and the franchise’s only NBA championship and revenge on the Bullets.

After moving on from the Sonics in 1985, Wilkens continued to add to his rich legacy by coaching successful teams in Cleveland, Atlanta, and Toronto and his role as an assistant on the 1992 Dream Team. Inducted into the Basketball Hall of Fame 3 different times (as a player, coach, and Olympian), Lenny Wilkens was one of the main forces behind the success of professional basketball in Seattle and his legacy will be long-remembered by Sonics fans everywhere.

Shop now
Your are successfully subscribed for email notifications.
✖

Notify me when available

We will send you a notification as soon as this product is available again.

Your email is requried