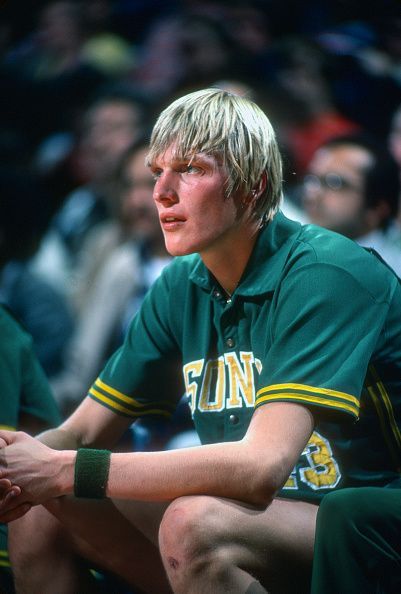 Taken by the Sonics with the 8th pick in the 1977 NBA draft, Jack Sikma entered the league as a little-known commodity out of NAIA Illinois Wesleyan. Immediately thrust into duty as the team’s starting Center, Sikma was a crucial part of the 1979 championship team despite only being in his second year, averaging 15 and 12 with 1.5 blocks during the course of the playoff run.

A model of consistency during his nine years in Seattle, Sikma made seven consecutive All-Star games for the Sonics (1979-1985). Sikma averaged 18/11 with over 1 steal and 1 block during the seven-year All-Star run and is unarguably the best Center in Sonics history. Always elite from the line, Sikma was one of the greatest free-throw to ever play the game and his career 85% mark remains the first all-time among Centers.

Sikma was the first great big man to develop a face-up game and a reliable jump shot. His patented reverse-pivot remains one of the greatest signature moves ever – Sikma would use it upon receiving a post entry pass to create space for an unblockable jump shot or drive by for a dunk if his defender overplayed him.

Though a great player during his career, Sikma’s legacy has had an even larger impact on the game. Sikma’s prowess as a jump-shooting big man blazed a trail for the stretch fives and pick-and-pop bigs of the 21st century. Countless modern bigs have stolen his moves and modeled their games after his – Dirk Nowitzki most famously. Sikma was inducted into the Basketball Hall of Fame in 2019 and widely lauded for his outsized contributions to the sport.